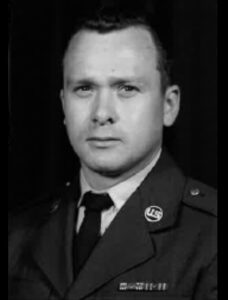 He served in the U.S. Air Force for 27 years. He is survived by his wife Joan Carol (Koehne) Swope to whom he was married 65 years.

Melvin received a member of certificate and accommodation in the Air Force where he retired as Senior Chief Major Sergeant. He loved swimming and working on things.

Melvin was a loving father, grandfather, and great-grandfather. He was active in his church, loved working outside in his garden, and loved working on his place. He built two houses along side his wife in Marian, Texas and Gilham, Arkansas

He lived in Cove, Arkansas for 20 years along side his family in which he helped them in their daily lives. He was always there when he was needed and will be greatly missed by his family and friends.

Melvin was with the 62nd fighter Interceptor squadron in the 56th fighter group (AD)(ADC) K.I. Sawyer Air Force base Michigan voasts a 12,300-foot runway capable of accommodating the huge 8 jet B52 Bombers, The KC135 Jet Tankers and F101 B Fighter Interceptor Air Craft based there.

He also served in Vietnam for a year transporting equipment back and forth between the different … to which he saw the aftermath of combat.

With 500 personnel and 13 aircrafts, the unit was poised in the middle of the tropical storm breeding grounds. Being stations in Puerto Rico enabled the squadron to search out developing storms more than 200 miles away.

While hurricane reconnaissance was the most colorful portion of the squadron’s mission, it also supported aerial refueling, Air Force Missile Test Center shots and atmospheric sampling missions for the Atomic Energy Commissions and other governmental agencies.