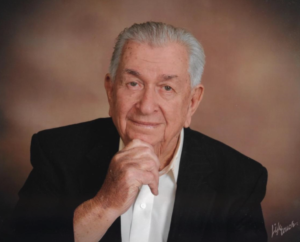 Vestal Royce Johnson was born to Bessie Johnson on August 22, 1927. He went to be with the Lord on January 21, 2022. He attended Jacksonville High School from 1933 to 1945. Upon his 18th birthday he was drafted to the US Army where he served at Ft. Lee and Ft. Eustis, Virginia. Vestal went to work for Roach Paper Company in December, 1947 through January, 1986. He then went to work for Butler Paper Company for 10 years. Vestal retired in 1996. He was a Master Mason for over 50 years at Jacinto Masonic Lodge #216 in Jacksonville.

Vestal married Freda Fortson in 1948, and they lived in Sherwood for 34 years. He was a member of the Sherwood Volunteer Fire Department for 27 years, retiring as Captain. He helped organize and volunteered as a coach for the Sylvan Hills-Sherwood Optimist Baseball Program. They moved to the Bayou Meto area in 1990 where he was an active part of his community by serving on the North Pulaski Water Association board of directors. Vestal served on the Bayou Meto Cemetery Association as Chairman of the Board. Vestal made many special friends while catering with Royal Foods for many years. He was a faithful member of “The Bayou Meto Boys”, a group of men who had grown up in the Bayou Meto area that met for breakfast on a weekly basis. Vestal thoroughly enjoyed their time together. Vestal loved to hunt rabbits and deer with his beagles. He was a member of the Manning Hunting Club for 43 years.

Vestal loved to tell a good story and make everyone laugh. In everything he was associated with he made lasting friendships. Vestal had lots of pride in what he did, how he looked, his home, and what he had accomplished in life. But his greatest pride was in his family. He was a great dad, even better grandpa, and the best great-grandpa.

The family would like to express their heartfelt appreciation for the genuine loving care of their family to Cabot Health and Rehab, and Arkansas Hospice.