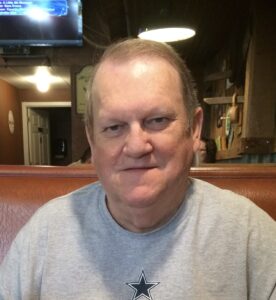 Jimmy was born on June 9, 1940 in Lonoke County, AR, to parents Garland Peterson and Margaret
Blasingame McRoberts (Roland). He graduated from North Little Rock High School in 1958.
While in high school Jimmy was a member of the band “The Starlites” who played at many school
and local events, even recording an album. In 1957 he joined the Air Force National Guard, worked
for Missouri Pacific Railroad, then entered into law enforcement as an officer for the Jacksonville
Police Department, prior to joining the Arkansas State Police. After several years with the State
Police, he and his family moved to Belton, Tx and ran a family restaurant and club. Upon returning to
Arkansas, he also returned to law enforcement as Chief of police in Dumas. After leaving law
enforcement he managed the Canteen at Camp Robinson leading up to retirement.

He enjoyed watching his favorite football teams, Dallas Cowboys and Arkansas Razorbacks, fishing,
sitting on the back porch watching the animals and birds, and most of all spending time with his family
and friends. His family and friends will always remember him as a man always with a story, witty
sense of humor and loving person.

In lieu of flowers, donations can be sent to American Diabetes Association or American Heart
Association.

A Celebration of Life will be held for immediate family.