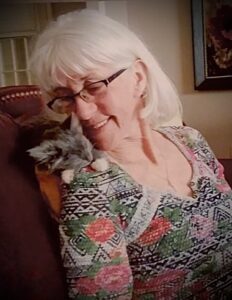 Shelby Jean Harvey, 70, of Roland, Arkansas passed away on Tuesday, February 8, 2022. She was born in McCrory, Arkansas on December 26, 1951 to the late Dewey Milton Bates and Odessa Dell Wilson.

Shelby had one child, Kristi, but met the boy whom she decided would be her son-in-law one day. This boy was a friend of Kristi’s, but Kristi had no romantic interest in him. Oddly enough, love blossomed on its own, and Shelby got to walk her only child down the aisle at their wedding.

Shelby leaves behind two sisters Wanda and Celie. She was the youngest child of seven children. Her surviving sisters were her oldest sister, and the other was her closest sister in age.

Shelby also leaves behind countless special nieces and nephews, with a special thanks to her niece, Shelly for being so helpful in these last couple of years. The family can’t thank her enough.

Shelby’s daughter, Kristi, would like to personally thank Arkansas Hospice for their help, support, and kindness.

In lieu of flowers, the family asks that you please consider making donations to Pulaski County Humane Society or the Alzheimer’s Association.

Services will be held at a later date.