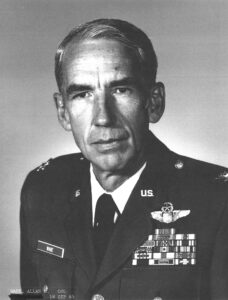 Colonel (Ret) Allan ‘Al’ Wade, age 86, most loving husband, father, grandfather, great grandfather and friend passed away in Little Rock, Arkansas, Saturday, February 26, 2022 with his children by his side.

Allan was born on September 16, 1935 near Rockbridge-Souder, Missouri to Ethel Wade (Byerley) and William Wesley Wade.  He graduated high school in Gainesville, Missouri.

Having enlisted in the Air Force in November 1954, he was commissioned through Officer Candidate School in December 1961.  In February 1963, he received his pilot’s wings at Reese AFB, Texas, completing initial qualification in the C-130 aircraft at Sewart AFB, Tennessee.  His 32-year career took him to such places as France, Okinawa, Thailand, Germany and many stateside assignments.  Among his many awards and decorations, Colonel Wade received the Distinguished Flying Cross, Meritorious Service Medal with one oak leaf cluster and the Air Medal with eight oak leaf clusters.  Colonel Wade retired in October 1986 as the 314th Tactical Airlift Wing Deputy Commander for Maintenance at Little Rock AFB, Arkansas.  After retiring from the Air Force, he worked another 12 years as a civilian contractor manager on the C-130 aircrew training program at Little Rock AFB, Arkansas.

Allan is preceded in death by his beloved wife Marjorie Wade (Woods).  They met at McChord AFB, Washington where they were both stationed.  They were married for 42 years and travelled the world together.

In lieu of flowers, the family requests that you consider making a donation to a Veteran charity of your choice.

Graveside service with full military honors will be held on Monday, March 7, 2022 at 11:30am at the Little Rock National Cemetery located at 2535 Springer Blvd, Little Rock, Arkansas 72206.