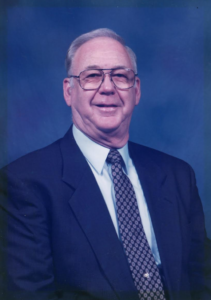 Raised around the Jacksonville area, he attended all 12 years of school in Jacksonville. He was a proud member of the Class of ’51, where he played football and was nicknamed Bull.

During the Korean Conflict Dave served in the Army. He liked to laugh and recall stories of his service spent mostly in New York City. He was a very proud veteran.

After military duty he returned to Arkansas where he worked a few short-term jobs before finding his “work home” at Redmond Motors, which eventually became Franklin Electric. Beginning as a time clerk, he worked his way to Manager of Engineering and finally to Manager of Human Resources.

One of his proud achievements while working with Franklin Electric was going to Wilburton, OK, and renovating, assembling, and starting up a manufacturing facility there.

After Franklin Electric closed, Dave spent the next few years as HR Director at manufacturing facilities in Des Arc and Brinkley before retiring.

Shortly after retirement, Dave discovered genealogy. It became not just a hobby, but his passion. Not only did he research his immediate blood line but also ever-expanding family ties. His genealogy data base contains upwards of 100,000 names. His research has aided many, many individuals seeking info on their family trees. He regularly received calls from across the U.S. and some foreign countries. Visitors were welcomed from Washington, Virginia, Texas, and several other states. He freely shared his research and has donated volumes to local libraries.

Interest in genealogy led him to cemeteries. This inspired him to, sometimes alone other times with other individuals, inventory and publish books on all the cemeteries in Lonoke County and many in northern Pulaski County. These books are available through the Lonoke County Library System.

For several years, Dave was co-chairman for the Bayou Meto Cemetery. He maintained the records and the cemetery. Several improvements were made during his tenure including the wrought iron fence and the pavilion.

Traveling was much enjoyed. Although Dave visited all fifty states, trips to the northwestern states and Canada were favorites because of the beauty of the mountains and all the wildlife. One trip would hardly end before another was being planned. There was adventure around every corner.

Dave always looked forward to fall. He loved time spent in the Ozark Mountains round the campfire with lifelong deer hunting buddies. And then there was Razorback football! He always hung Razorback flags on the fence in front of the house.

Visitation is Wednesday March 16, 2022 from 5pm – 7pm at A Natural State Funeral Service in Jacksonville. Graveside services will be conducted Thursday, March 17, 2022 11am at Concord Cemetery at 150 Concord Church Road Lonoke, AR. 72086.

To view a slideshow of David, please follow the link provided below.