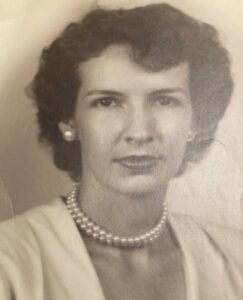 Palentine Cordella “Della” Russell, 93, of North Little Rock, Arkansas, passed away
on Monday, March 28, 2022 at her home. She was born November 24, 1928 in
Texarkana, Arkansas, to the late Andrew J. Couch, Sr. and Pearl Carroll Couch.

Della was preceded in death by her parents, her husband of 62 years, William F.
“Frankie” Russell, sisters Cathy Perrien and Trudy Couch, and brother A. J. “Andy”
Couch, Jr.

Della was known as “Bango” by her friends and family, a name given to her by her
first granddaughter. The name stuck with her, and everyone who knew the
family, called her by that name, including her husband, Frankie.

Della was an employee of Southwestern Bell Telephone Co. for 30 years, and
served as Payroll Supervisor for several years. She and Frankie enjoyed traveling,
attending the horse races at Oaklawn Park in Hot Springs, and spending time with
friends and family. She also made her famous Pecan Pie for our family
gatherings!

A family graveside service will be held at a later date.