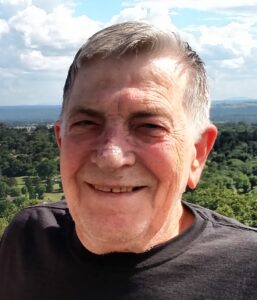 Son, Brother, and Friend were just a few titles that Robert Thomas carried, but the one’s he cherished the most were Husband, Dad, and Pawpaw. With the love of his life by his side, Robert passed away on Sunday, March 20, 2022.

Robert enjoyed the simple life and anything that came his way as long as his beautiful bride, Patricia was by his side. Robert and Pat were married in December of 1959 and enjoyed every moment of life together. They raised three boys, Randy, Stuart, and Jason Thomas.

As a family, they spent time together outdoors camping, fishing, and riding motorcycles. Robert loved the outdoors and once he built their property surrounded by the gorgeous nature of Arkansas, life was complete. He was surrounded by nature and had the perfect place for him and his bride.

His family grew and Robert became the best grandfather and great-grandfather known as Pawpaw. Robert loved spending time with his granddaughters. He showed them nature’s finest gifts. They watched the deer in the fields, took walks to the river, rode the four-wheeler around the property. He even made a sign for the snakes that they weren’t welcome to ease the fear of snakes being around. Robert was a loving Pawpaw.

Robert was not a stranger to having a big family. He grew up in a household with his parents, three sisters and one brother. They stayed close and kept a relationship throughout Robert’s life. Robert always enjoyed getting together with his siblings and that never changed as they all started having families of their own.

Robert loved his family. He lived a beautiful life and will continue to live on through each of us.

There will be a service to celebrate Robert Thomas’s life on Friday, March 25, 2022 at 2:00pm. The memorial service will be held at Thornburg Baptist Church in Perryville, Arkansas.