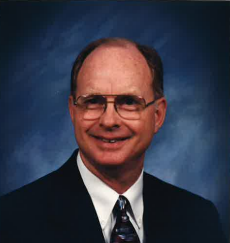 He was preceded in death by his parents Belva Jane and Thomas A Hulsey and sister Jane Silvertooth.  He is survived by his sons Michael Hulsey and Alex Hulsey (Amy) of El Dorado, grandchildren Alexa and Audrey, and niece Shannon Davis (Ken).

Mike was raised and spent most of his life in El Dorado, later living in Hot Springs, Arkansas.  After attending Henderson State University, Mike worked for Burroughs Corporation (now Unisys) in the South and Midwest, becoming the top salesperson in his region.  He then moved back to El Dorado to help his father while working for Great Lakes Chemical for over 25 years. During this time Mike founded Eli Fuller Inc., a small business offering banking business machines and office supplies for 30 years.

Mike was friendly, kind, and giving to everyone he met.  He loved attending church, learning about God’s word, leading small groups, and helping with Bible lessons for children.  He served as a substitute teacher, transported children with special needs to school, drove individuals without transportation to medical appointments, and supported school programs for Indigenous Americans.  Mike was passionate about causes that benefited people with special needs, volunteering his time at what is now called the South Arkansas Development Center for Children & Families and Abilities Unlimited in Hot Springs Village.

Mike was an engaged loving father, always prioritizing his family and taking time for his kids.  He did not want to be praised for who he helped or his contributions.  He was a humble person and gave of himself so that others could thrive.  If Mike was here today, he would ask us to continue loving and serving others better than he did.

A visitation will take place at 1:00 PM, Friday, March 4, 2022 at St. Paul United Methodist Church in El Dorado followed by a memorial service at 2:00 PM with Rev. Walter Smith and David Reuhr officiating.

In lieu of flowers, memorials may be sent to HOPE Landing (www.hopelanding.com/how-to-help/donate.html) P.O. Box 10215, El Dorado, AR  71730 or to the charity of your choice.