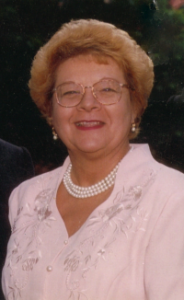 Arlene Marie Thode Marcotte went home on April 26, 2022. She is in the eternal company of her husband Wayne, son Ronald and granddaughter Lauren. There are many angels flying high today.

Mom was born on June 18, 1941 to Henry and Clarice Thode in Red Lake Fall, MN as one of five children. She lived in Red Lake falls until she married her soul mate Wayne on June 17, 1961. They began their life together and lived at several homes in Louisiana, Kansas and Texas before finally settling in Jacksonville to raise their family

Arlene had a decades long career in the banking industry working for First Federal Savings & Loan in Thief River Falls, MN then moved to Arkansas through Wayne’s Air Force Service. After relocating to Arkansas, she worked for Citizens Bank, Worthen Bank, Boatman’s Bank, and Bank of America where she attained the title of Vice President. She retired from banking in 1999 but could not stay away. She then started working part-time at L’Oréal USA Federal Credit Union until Wayne’s health took a turn in 2021.

Arlene was an avid bowler from 1961 to 2014 when her health took a slight detour. She also loved bird watching and especially loved her hummingbirds as well as the blue and yellow finches. She always kept Boston ferns we believe only for the sole reason that birds nested in them.

Another highlight in her life was the time spent with her grandkids. She was always willing to make time to shop, go to the movies or just grab lunch.

Funeral Service will be held on Monday, May 2, 2022 at 10:00am at A Natural State Funeral Service; 2620 West Main Street, Jacksonville, Arkansas. Burial to follow at Mt. Carmel Cemetery in Cabot, Arkansas.

To view a tribute slideshow of Arlene, please follow the link provided below.