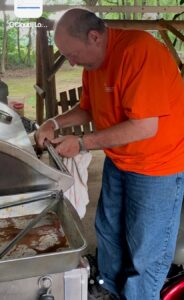 Bobby was an avid griller, he loved cooking, and being outside. He also enjoyed gardening, camping, fishing, traveling, and spending time with his family.

Bobby was preceded in death by his parents Floyd Lawson and Virgie Williams; his daughter Melisa Lawson; his siblings Shirley Ann Lawson, Jimmy Lawson, and Louise Jones; and his nephew Eddie Jones.