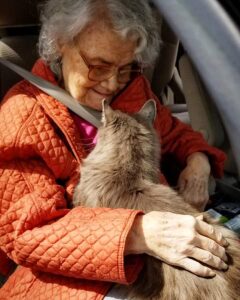 June Pauline Goforth, of Maumelle, AR passed away on Thursday, April 21, 2022.  June was born on June 16, 1934 to Arthur and Annie Burge, in Corona, CA.  Early in June’s life, her parents moved their family to Southeast Missouri, eventually settling in Winona, MO.  It was in Southeast Missouri where June attended public school and started a family, with her first husband Robert Debord, Sr.

June was a giving person, often helping those who seemed forgotten by society. June’s employment included child daycare, home healthcare, disabled adult care, foster care and special needs education.  While in her 40’s June attended community college in Harrison, AR and received her Associates Degree. An accomplishment she was very proud of. June was an artist, a dreamer and a generous person. June was a Christian and loved attending church with her family and friends.

June battled numerous health problems, as the result of a 2017 automobile accident. In 2018, June was placed in the care of the Lakes of Maumelle Nursing Home, in Maumelle, AR.  This facility has been a tremendous blessing to June and the staff treated her with the upmost affection and attention, as though she was their Momma.

Rest in peace Mom, you are now in the Lord’s eternal care.

A memorial service will be scheduled at a later date. Please contact Nathan Painter for more information.