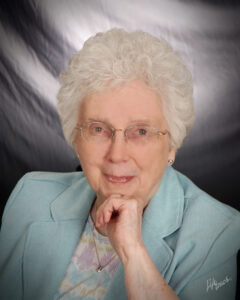 Margie Berry Robertson entered the presence of her Lord and Savior, Jesus Christ, on May 8, 2022.  She was born on March 23,1925, in the house her grandfather built in New Orleans, LA, on Claiborne Avenue.  While still a teenager she came to know Jesus as her Savior under the ministry of Pastor Ray Fortna at Carrollton Presbyterian Church. After graduating from Newcomb College in 1945, she worked in the Tulane Library where she first met Jim Robertson, a handsome young Marine veteran from Wichita, Kansas. Margie led Jim to the Lord, and after they were married in May of 1951, they heeded the call to go to the mission field.  Preparation for that began at Moody Bible Institute, after which they joined United Indian Mission in Flagstaff, Arizona. In 1958 they opened the field in central British Columbia, ministering to the Carrier Indians. Their family grew to 6, adding 4 boys during the years from 1952 to 1961. They returned to the U.S. in 1963, joined Brazil Gospel Fellowship Mission in 1965, and went to Brazil in 1966. They returned from Brazil in 1972 and lived in New Orleans until 1998. During those years in New Orleans they ministered to many college students through home Bible studies, to international students while on staff with International Students Incorporated, and in the homes of many members of Berean Bible Church. They moved to Little Rock in 1998 and became members of Oak Park Baptist Church.

Margie went through periods of physical and emotional struggles, yet she never backed away from her commitment to serve her Lord and Savior. God did a great work in her life during the 70’s as she opened her heart and home to reach out to young people who flocked there to hear the truth of the Bible being taught and to receive counsel in dealing with the struggles of life. She began to have a greater and greater impact in the lives of women at church who knew the outpouring of their hearts would be heard and prayed for.  Though never well off by American standards, she always found ways to comfort and encourage through thousands of small acts of kindness such as cards and little gifts. She was a very gifted letter writer who prayerfully used every word to shine truth and compassion into the lives of those she corresponded with. Her last days were spent at Presbyterian Village in Little Rock, where her gentle heart and love for others still touched people’s lives though her body was failing her.

She was preceded in death by her parents, her sister, Betty, and her son, Joel. She is survived by her husband, Jim, 3 sons, Steve (Liz), Jim (Wanda), Dan (Tiffany), Joel’s wife Ella, 7 grandchildren, and one great-grandchild.

A memorial service will be held at 1:00 PM on June 11 at Oak Park Baptist Church, Little Rock, AR.