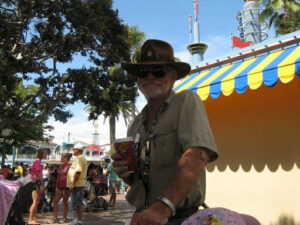 Fred loved Disneyland and enjoyed pin trading. His favorite Disney character was Tinkerbell. He loved reading National Geographics and watching his favorite actor, the Duke, John Wayne. He was intrigued by military planes and would go to air shows whenever possible. Fred is going to be missed by everyone who knows him. He truly was a friend to everyone and never met a stranger.

Fred is survived by his wife, Sandy Minnick-Buchanan, to whom he was married for the last 42 years. Fred adored Sandy and Sandy was his world, even more so as his health was failing. Fred was preceded in death by his parents and three brothers, Robert, Stephen and Patrick Buchanan. He is survived by his sister, Sandra and brother, Michael Buchanan. Fred is also survived by his children from his previous marriages: Ricky, Russell, Ronald, Lorraine and Robert. He is also survived by his sons, Jon and Terry, Sandra’s sons from her first marriage. Fred stepped up and became their father-figure. Although they called him Fred, he was their Dad in all the ways that mattered. Fred was blessed with 19 grandchildren Brian, Sammy, Emily (his Tinkerbell), Eliza, Ellie, Michael, Tyler, Amber, Sean, Lailani, Christopher, Stephen, Kylei, Devon, Travis, Brandon, Nicole, Joel, Megan and 6 great-grandchildren.