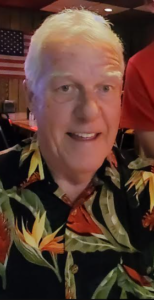 David S. Kendrick, 73, Hot Springs, AR, passed away peacefully with his family by his side on July 1, 2022 after a brief illness.

David was born November 25, 1948 in Coffeyville, KS to Scott and Doris (Morgan) Kendrick.

He graduated from Field Kindley Memorial High School in Coffeyville, KS in May 1967, then attended Kansas State University to study Architecture. David served in the Army National Guard from 1970 to 1975 with an Honorable Discharge. He worked as a designer/draftsman until retiring in 2017 after 42 years for Guaranty Performance Co of Independence KS, which later became Earth Care Products.

David married Debbie Gillis on October 25, 1975. They were later divorced.

David moved to Hot Springs, AR in 2017 to enjoy retirement and the horse races. He loved his dogs, especially Dexter! There were always 4 to 5 dogs at a time or the house didn’t seem complete. David loved to cook, always making new dips and hors d’oeuvres. He was also known for his desserts and he made a special cake for Carissa’s birthday and hosted the family for her birthday celebration every year. David loved everything Frank Lloyd Wright! He incorporated Wright’s architecture and furniture designs in his own home.

David was preceded in death by his parents and great niece, Kaelyn Kendrick.

Services will be July 23, 2022 1:00 pm at the First Presbyterian Church Coffeyville KS. Private inurnment will be at a later date next to his parents at Fairview Cemetery Coffeyville KS. Memorial contributions can be made to Coffeyville Friends of Animals PO Box 1654 Coffeyville KS 67337.