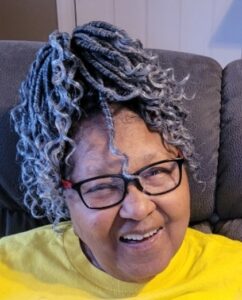 Lucille Woodson Lewis was born in Enterprise Alabama to Rev. Homer Weeks and Bertha Mae (Fleming) Weeks. Lucille W. Lewis settled in Fort Lauderdale Florida at an early age where she was Baptized and grew up in the church. She attended Broward County schools including Walker Elementary and Old Dillard High School. Her Sojourn included living in Maryland, Pennsylvania, New York; back Florida, and her last residence was in Cabot Arkansas. She continued her education at Manhattan Medical Technical School.

Her career included 35 years employed as the Supervisor for the Non-Invasive Cardiology Department at Holy Cross Hospital, Fort Lauderdale Florida; Adult Education Instructor for Cardiac Testing at McFatter VoTech, Davie Florida.  She was a Member of Mt. Bethel Baptist Church for fifteen years where she served in various ministries under the leadership of Bishop C.E. Glover.

Her Faithful Dog Smokey who remained by her side until she made her transition.

The Family thanks you for every call, prayer, and the act of kindness you have extended to each of them.