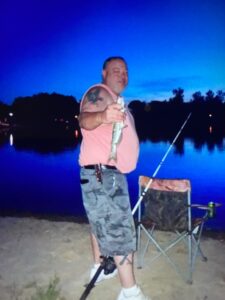 Rodney is preceded in death by his mom Joyce Robinson and his brother Richard “Rick” Davis.

Rodney spent many years working in the food and trucking industry. He enjoyed fishing, being outdoors, and anything with his boys. Rodney also loved anything to do with cooking and grilling especially for friends and family. He was always a loving and caring father, friend, and companion, and will be missed very dearly.

He is survived by his father Richard “Dick” Davis; his stepmother Liz Davis; his sisters Lisa White and Heather Gadway; his brother Tom Davis; his children Rodney and Nicole Davis, Macauley “Mac” and Makenzie Davis, and Camden “Cam” Davis; his four grandchildren; his nieces and nephews; and his former wife and friend Shayla Davis.

A private memorial service will be held at a later date.