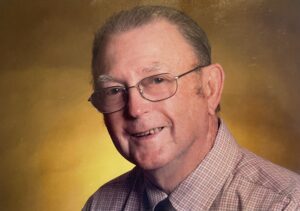 On Friday, July 22, 2022, Wayne Jervis, loving husband, father to 2 children, and grandfather to 4 grandchildren passed away at the age of 85. Wayne was born on April 8th, 1937, in Livingston, KY to William and Nora (McCormick) Jervis. On July 23rd, 1960, he married Nelda Livesay. They raised 1 son, Kirk, and one daughter, Donna.

Wayne joined the U.S. Air Force in 1955 and retired in 1983. He was a Vietnam veteran during which time he was awarded the Distinguished Flying Cross with 1 oak leaf cluster, the Air Medal with 1 silver oak leaf cluster, and an Air Force Commendation medal. As a flight engineer and flight instructor on C-130s, he had over 1200 combat flying and mission hours. After retirement, he worked as an auto mechanic, first at Russel Chevrolet, then in his own shop.

Wayne’s hobbies were painting, building engines, and baking bread. He loved the outdoors and could always be counted on to taste all the berries while walking in the woods. His grandchildren loved hanging out with him in his shop, riding the go-cart and 4-wheeler, collecting bugs and frogs for cash (25 cents for each), and many other cherished adventures. They would like you to know he was the best granddaddy anyone could ask for.

Wayne was preceded in death by his father, William, his mother, Nora, his sister Eileen, his brother, Charles, and his nephew, Steve. He is survived by his wife, Nelda, his son, Kirk (Sharon) Jervis, his daughter, Donna (Jeff) Truax, his grandchildren, Kristin (Josh) Hodge, Jessica (Colby) Jervis, Aaron (Eva) Truax, Scotty Jervis, 2 great grandchildren, and 4 nieces and their families.

In place of flowers, you may donate to your charity of choice or to Mt Pleasant Baptist Church, Cabot, AR.

Family and friends are invited to visitation at Mt. Pleasant Baptist Church, Cabot AR on July 30th, 2022 at 1:00 pm. Services will follow at 2 pm.