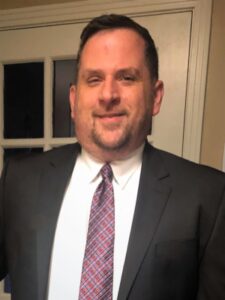 Brian Daniel Smith entered the presence of his Lord and Savior on Saturday, August 27, 2022.  He was born on January 8, 1978 in Shreveport, Louisiana to the late Mary Eva Statham Smith and Daniel Ellis Smith. He is preceded in death by his maternal grandparents Charley and Mamie Sue Statham; paternal grandparents Millard and Lois Smith; and father-in-law James Donald Clements.

He is survived by his wife of 15 years, Sarah Clements Smith and their children Owen Taylor Smith, 13, and Whitley Irene Smith, 11, of North Little Rock; his sister Kristen Watts (John) of Shreveport and nephews Hayden Watts of Little Rock and Jake Watts of New Orleans. He also leaves a host of extended family and friends, including his mother-in-law Kathey Harwell of North Little Rock. While Brian’s loved ones cherish his memory and grieve his passing, by the grace of his Savior they do so with hope.

Brian was a train enthusiast! When time allowed, he could be found admiring trains at the yard and photographing them enroute. This interest was prompted by his early childhood when he lived just north of Shreveport near the train tracks of KCS. Much to the chagrin of his family, he loved being in the car and getting “caught by the trains!”

In May 1996 Brian graduated fourth in his class of 182 students at Northwood High School. He was so proud to have earned this distinction, being named one of the “Falcon Five.”

In 1983, Shreveport experienced sudden, severe weather.  As he and his mother were trying to take shelter, they felt the physical force of the tornado and witnessed their car doors being blown backwards.  At five years old he became fascinated with the weather, and The Weather Channel trumped cartoons as his entertainment of choice.

His love of all things weather-related led him to the University of Louisiana at Monroe, where he graduated in December 2000 with a Bachelor of Science degree in Atmospheric Science and a minor in History. On August 27, 1999, Brian began the Student Career Experience Program at the National Weather Service in Shreveport where he remained until December 21, 2000, when he was hired to a permanent position as a Staff Meteorologist at the National Weather Service office in Little Rock.  At the time of his passing, Brian was a Senior Forecaster. He was a climate and weather history enthusiast and enjoyed authoring social media posts on Arkansas weather history facts.

In addition to Brian’s love for weather science and history, his love for Jesus, scripture and his family took top priority in his life. Psalm 19:1 says, “The heavens declare the glory of God; and the firmament shows His handiwork.” Brian always felt that his appreciation for science enhanced his knowledge and worship of God, his creator and sustainer.

Brian’s memorial service will be held at 11 am Friday, September 2 at Central Baptist Church, 5200 Fairway Avenue North Little Rock, AR with visitation preceding from 9:45—10:45 at the church.

Please share memories of Brian so that his children can be reminded of all the great friends who blessed his life, and he theirs.  http://forms.gle/z6Ga3ko9ULn9wGwi8

In lieu of flowers, donations can be made to Brian’s GoFundMe.