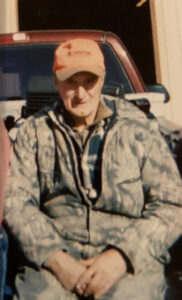 George Ronnie Garrett, age 72, of Griffithville, Arkansas went to be with the Lord on Tuesday, August 16, 2022. He was born in McCrory, Arkansas on October 9, 1949 to the late George D. and Catherine Garrett.

George is preceded in death by his parents George and Catherine Garrett.

George was married to his lovely wife, Mary, for almost 50 years. He enjoyed hunting and fishing, and he especially loved spending time with his friends and family.