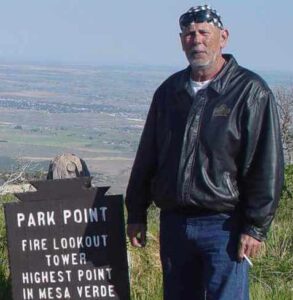 Jackie is survived by his wife of 50 years, Sherryl (Guthrie) Miller, three children, Steve (Denise), Les, Rhonda (Matt Wooldridge), all of Lonoke and a grand-daughter he raised as a daughter, Kayla Miller.  He and Sherryl were also helping to raise two of their great-grandchildren, Aiden Miller and Shon Roberts.  He is survived by 6 grandchildren and 11 great grand-children. He is also survived by two brothers, Charles “Buster” Miller of Texas and Johnny Miller of LA; sisters, Barbara O’Fallon of LA, Helen Hert of WA, Linda (Kenny) Clark of LA, Ann Ashley of LA, Peggy (James) Bowlin of LA, and Donna Miller of MO, and a brother-in-law Cary Stokes also of LA.  We also want to acknowledge Antony Roberts who was with Jackie the last two months helping to make his life as comfortable as possible.  Jackie ran him ragged, ringing that bell every 30 minutes wanting to be moved from living room to kitchen, then 30 minutes later ringing the bell to be moved back to the living room.

Jackie loved to play his guitar and sing.  That is something the family will always remember, the get-togethers and the family sing-alongs.  He also enjoyed pistol shooting, and entered several combat shooting contest.  He won 3rd place in the Indoor US Nationals back in 1981. He did side-line work on pistols/guns at Broadway Arms for several years in between Cotton Ginning season, his real job.  He started working in cotton gins at Lake Providence, LA, moved to Sunflower, MS to operate a gin and moved to Lonoke in 1977 to become the manager of Pettus Cotton Gin, a position he held for 35 years.  While in Mississippi Jackie went to college and received his Industrial Electrician’s license.  While there he helped write a text book on repairing cotton gins.  He was known all over the south for his knowledge of “mixing busted gins”.

Jackie also loved to ride motorcycles.  He and his friends rode all over the United States.  His best memories were riding with Sherryl and her cousins Carlotta and Robin Ashley.  They saw so much country and made many memories.  THOSE were Jackie ‘s Favorite memories.

A memorial service has been planned for August 20th at 1 p.m. at the Lonoke County Museum, 215 SE Front St. at Lonoke, AR.