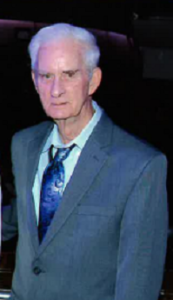 Charlie served in the United States Army for 8 years and 8 months. He was honorably discharged as an E6-Staff Sargent. During his time in the Army, he served in Germany, Korea, Ft. Bragg NC, and Ft. Jackson SC. He was a transportation Sargent Master and a Quarter Master and won a sharp shooter medal.

Charlie enjoyed hunting, golfing, and especially loved watching his grandchildren play at sporting events. He also loved to travel, especially when it came to cruises. Charlie attended the Roberson Memorial Baptist Church in Lonoke, Arkansas. He was also a member of the Mayors Armed Forces Committee in Sulphur, Louisiana and a Disabled American Veterans member.

A special thank you to Kindred Hospice and other caregivers who took wonderful care of Charlie.

Visitation will be held on Saturday September 17, 2022 at 9:00 AM with Funeral Services to follow at 10:00 AM at A Natural State Funeral Service, 2620 West Main Street, Jacksonville, Arkansas.