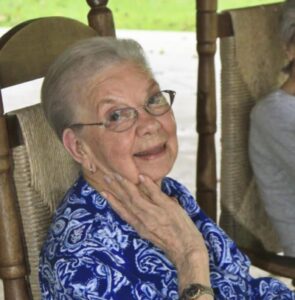 Ina LeCroy Stanage was born January 10, 1926, in Hot Springs, Arkansas, to William Deckard LeCroy and Ruby Lloyd LeCroy. She grew up on a bucolic farm in Garland County where she and brothers William, George, Robert, and Thomas worked and played among rolling hills, orchards, and streams. Ina graduated from the nearby Lakeside High School in 1944, which her father helped found in 1928. In 1947, she married the love of her life, J.R. “Russ” Stanage, and together they built both a family and a successful underground utility construction business, Stanage Company.

In 1963, Ina’s husband was involved in a serious vehicle accident, which left him partially paralyzed for the remainder of his life. During these dark days for the family, Ina and her sons pushed through until Russ was able to work again. By the late 1960s, it was not uncommon for the Stanage home to be a place busting at the seams with teenagers who marveled at the family’s industrial-sized Humphreys Dairy milk dispenser. By the 1970s, Ina and Russ built a new home in Hot Spring County on land they acquired along Tigre Creek Road. It was not unusual for guests to stop by, especially after church at Centerview and later Meadowview Missionary Baptist. One such Sunday, a newly married woman, marveling at the modern and large home, wistfully asked, “Miss Ina, how did you know when you had it made?” to which she replied, “When we could afford two tubes of toothpaste.” It was that simple and folksy humor that people will remember of Ina.

When not sharing stories, Ina could be found curled up with a good book, her favorite was “To Kill a Mockingbird” by Harper Lee. Adventure was not limited to stories in books, during their youth, she and Russ enjoyed post-World War II life while he was stationed with the Navy in Oceanside, California, and later RV travel, including a cross-country trip with then teen son Mike. As an octogenarian, she was a keen user of Facebook, which she found useful in staying in contact with others as her mobility and hearing declined.

Extended family was always a comfort to Ina. In 2017, she was so thankful to have had an opportunity to catch up with LeCroy family at a reunion organized by niece Lynne LeCroy Slaton. Visits from nephew Mike Stanage and wife Jodi and sister in law Annette Stanage were sweet distractions as Ina spent more time at home.

As consciousness became more challenging, Ina shared that she was ready to be with her beloved Russ, who preceded her in death in 2016. She longed to hold their infant daughter who died shortly after childbirth in California and she dreamed of being with her parents and brothers again on their farm. Ina was called home to be with her savior and those cherished friends and family who went before her on September 27, 2022.

The family would like to express particular appreciation to Mike Stanage for his years of selfless devotion caring for his parents as well as Hospice Home Care of Garland County and the VA Home in Hot Springs who made Ina’s final days more comfortable. The family will observe a private memorial honoring both J.R. and Ina Stanage per the couple’s wishes. Interment of ashes will be at the Stanage family plot in Strangers Home Cemetery, Alicia, Arkansas.

Arrangements have been entrusted to A Natural State Funeral Service 2620 West Main Street, Jacksonville, Arkansas, 72076. 501-982-3400. Her online guestbook is available at www.anaturalstatefuneralservice.com