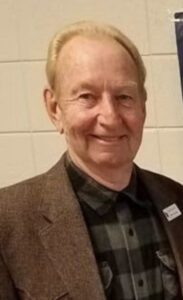 James Valentine Newburg, age 77, died Thursday, September 1, 2022, at the Beebe Retirement Center from complications of dementia.  He was born on February 14, 1945, the second of seven children, to the late Mary (Fogel) and Charles Everett Newburg in La Crosse, Wisconsin.  He grew up in the La Crescent, Minnesota/La Crosse, Wisconsin, area, which he affectionately referred to as “God’s Country.”  Jim was of the Catholic faith.  He graduated from St. Thomas Aquinas High School in 1963 and enlisted in the U. S. Navy.  Jim served aboard the USS Canberra, which was deployed to Vietnam.  Following his military service, Jim worked in dispatch and operations for Smith’s Transfer in Cedar Rapids and then in Davenport, Iowa, where he married Christa Rae Fredrick in 1978.  They raised three children together – Jessica, Michael, and Jamie. The marriage ended in divorce in 2009.

Jim loved his work for Smith’s and was thrilled that Jessica and Michael were born in Davenport, but he did not enjoy winter weather and readily accepted a promotion in 1986 to terminal manager in Memphis, Tennessee, where daughter Jamie was born.  Smith’s was acquired by American Freight, which resulted in Jim’s transfer to Little Rock in 1988.  Unfortunately, AF closed shortly after that move, but Jim found work with P.I.E. and then Transcon before those companies also went under, as many LTL carriers did in the early ‘90s following deregulation.  The family didn’t want to leave Arkansas, so, before it was cool, Jim became a stay-at-home dad to his three children.  This worked well for the family and Jim enjoyed it.

When he wasn’t maintaining the household, shuttling the kids to school or activities, or coaching baseball, Jim loved working on his landscaping and tending to his beautifully manicured lawn.  He also enjoyed music and was known for his moves on the dance floor.  Jim was a life-long sports fan, and he loved watching his Green Bay Packers, the Chicago Cubs, Iowa Hawkeyes, and Arkansas Razorbacks.  Jim loved, enjoyed, and was so proud of his children, and he adored being “Papa” to his only grandchild, Abbie Moser.

Jim was preceded in death by his parents, his sister Sheila Newburg, and brother Jeffrey Newburg.  He is survived by his children, Jessica Moser of Jacksonville, Arkansas, Michael (Susan) Newburg of Mechanicsburg, Pennsylvania, and Jamie (Corey) Ford of Charlotte, North Carolina; by his granddaughter, Abigail Rae Moser; by the mother of his children, Christa Jacimore of Little Rock, Arkansas; by brother Everett (Janice) Newburg, sister Shirley (Larry) McGrath, sister Marilyn (Joe) Maier, and sister Sandra Newburg, all of the La Crosse, Wisconsin, area.

The family wishes to thank the loving caregivers at Beebe Retirement Center.

A memorial service and time of visitation will be held in the chapel at A Natural State Funeral Home, 2620 West Main Street in Jacksonville, Arkansas, 72076 at 2:00 p.m. on Saturday, September 17, 2022.   In lieu of flowers, donations may be made to the USO. Jim’s online guestbook is available at www.anaturalstatefuneralservice.com

To view a tribute slideshow of Jim, please follow the link below.