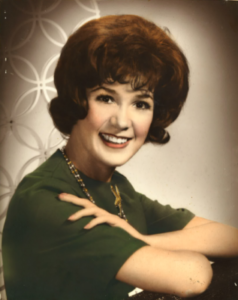 On September 5, 2022, while surrounded by family, the spirit of Joanna Baker slipped quietly from her body, and into the night through an opened bedside window.

Her life began in Little Rock, Arkansas on October 22, 1940. She was born into a large family, to her parents, Claude and Dorothy Henson. She had four brothers and one sister, Diana Thomas. Throughout her entire 81 years, Diana remained much more than a sister, but also, her most cherished friend and confidante. Up until Joanna’s final hours, they could be heard talking on the phone throughout each day.

Joanna is also survived by her husband of 58 years, Bobby Baker, as well as, their four sons, Gary, Mark, Scott, and Bobby Joe (BJ). She is also missed by her six granddaughters and too many fast-moving great grandchildren for an accurate count.

Joanna Baker was loved by many and touched countless lives with her kind-hearted and giving nature. She contributed to several charities and donated annually to PBS, even when difficult to do so. While she was the first in line to help other people, her kindness was truly felt by the injured, stray, and discarded animals that found their way into her path, heart, and family.

One occasion comes to mind when raging flood waters reached her back yard. She saw what appeared to be a soaking wet, scared, and trembling dog at the water’s edge. She could be seen near the reluctant animal, trying to coax it with a sandwich, to come inside for warmth and comfort. This was the only canine that I can think of that didn’t come inside to become family. But he needed to find his own missing family…of coyotes.

While that coyote may not have become family on Earth, I am confident that he will join the souls of the multitudes of animals saved by Joanna, and, help guide her to the family that have passed before her, and have been missing from her life, here on Earth, including her parents that have been gone for decades. As Joanna begins her journey to be with her parents, she will also join them at her final resting place. She will be laid to rest alongside them at Pinecrest Memorial Park.