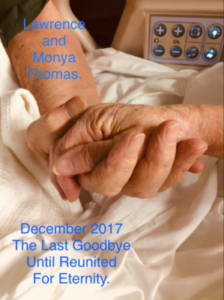 Lawrence Lee Thomas Jr. 84 passed from this life just before sunrise Tuesday morning September 6, at his home in Sherwood Arkansas with his daughter and son in law William and Laura Lowe at his bedside, reuniting with his bride Monya Litton Thomas to spend eternity together with Christ. Monya preceded him in death December 14 2017. Lawrence was born September 12, 1937 in La Mar County, Texas to the late Lawrence and Willma Thomas.

He was preceded in death by his younger brother Jimmy Don Thomas.

His early life was spent in Texas with the family moving to Eldorado, Arkansas where he graduated high school and joined the US Air Force. After serving at Fort Ladd airbase in Alaska, Lawrence returned home to El Dorado. Meanwhile, his wife Monya, who was born on April 8, 1939, was growing up in Gurdon, Arkansas graduating high school there then attended Southern State University in Eldorado.  This is where the romance began. They were married in Gurdon September 7, 1958, and spent their last wedding anniversary together September 7, 2017 much more in love with one another than either thought possible from the love of the newlyweds.

A few years later when Lawrence was discharged from the US Air Force, he took a job with Southwestern bell telephone company in Hot Springs, where daughter Laura was born in 1964. After the death of Monya’s father LD Litton the family moved into the home of her mother Wilma Litton, in Sylvan hills. There they both cared for her until her death April 13 1984. They joined the Sylvan Hills First Baptist church making lifelong friends. A few years later, son Larry Dowell Thomas was born on July, 1970. The family of five now all would call this house in Sylvan Hills their family home.

All the while Lawrence continued working for the telephone company and Monya worked part time at JCPenney at McCain mall. Lawrence loved to fish and hunt; he was a member of the Hawg caller’s bass club and life time member of AAA hunting club in Chidester, Arkansas. Monya enjoyed her women’s Bible studies and her time with the children’s activities at CAC elementary school and Sylvan Hills first Baptist church. Family always came first for Lawrence and Monya whether it be bible school, Halloween carnivals, Christmas parades, girl scout camp.

This being so the family enjoyed exploring their own home state Arkansas the Natural State as it’s called. They enjoyed the many rivers, lakes and both the Ozark and Ouachita Mountains. The took day trips weekend and vacations tent camping all over Arkansas. Their children offended joked they had never spent the night in a hotel room until they attended a funeral out of state. The children grew up graduating high school and leaving home to begin their adult lives.

Shortly before their retirement began Laura had their first grandchild Daniel Litton White, when Laura tried to get him to call his grandparents Poppa Tom and Momma Tom, Lawrence’s nick name, he decided Lawrence was the Poppa and Monya was Tom. From then on, they were affectingly known as Poppa and Tom. They continued living in the home in Sylvan Hills, now called Sherwood throughout their retirement years. The still made trips to their favorite sites in Arkansas and extended trips to visits with the Texas folks, the difference this time was they always stayed in a hotel and often a nice one. They continued activities with fellow seniors at Sylvan Hills first Baptist church. Lawrence continued to hunt, most times Monya would go with them staying in the holiday inn express in Camden and eating supper at the steak house next door. During these retirement years is when the fruits of the Holy Spirit blossomed. Galatians chapter 5 “the fruit of the spirit is love, joy, peace, longsuffering, kindness, goodness, faithfulness, gentleness, and self-control in all things.” These fruits are what drew people to them and they gladly shared them as they were from the Lord. For it was no secret the Lord reigned and all were welcome in their home.

Their love and kindness were felt by everyone. family, friends and even strangers were all recipient of their generosity without judgment. Poppa Always had a coat or jacket if one was needed and many people went shopping and were fed from Tom’s pantry. They always bought extra can goods and staples to share and the yard sale hauls usually consisted of things bought to give away. Friends of their children and grandchildren, their “adopted kids” they called them were always stopping by to see Tom and Poppa some bringing their children and even grandchildren back to visit them. Tom and Poppa will always be thought of as Humble and Kind.

Grandson Daniel added Tom always treated everyone the same, never judging just giving love and kindness to everyone and Poppa was the greatest man he ever knew, his best friend, his mentor, and his Idol. He taught him everything he knew and knows Poppa is fishing in Heaven with Jesus waiting for us to come home to see him and Tom again.

A special thankyou to Pastor Kevin McMahan for his bedside ministry with Lawrence in his last few months on earth. Memorials or gifts may be made to Journey Church, 4411 E43rd St, North Little Rock, Arkansas, 72117.