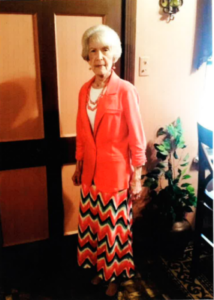 Billie Dawn Dickson, 86, of North Little Rock passed away on October 2, 2022 after a short and courageous battle with colon cancer.

Billie was born to Ed and Blanche Hardcastle on Friday, December 13, 1935 at their home in North Little Rock, Arkansas. She graduated from NLR High School in 1953 and married her first husband, Tommy Cobb a year later. They had three sons, Brian Keith, Thomas Kevin and Peter Kent.

After their divorce, she took in ironing and worked part-time jobs during the holidays to provide Christmas presents for her children.

In 1968 she married Don Dickson and they had one daughter, Shari.

Billie had a love of books and was a voracious reader until her eyesight started to fail. She always said that if she was ever stranded on a deserted island the one thing, she would want to have with her was an endless supply of books.

Billie accepted Jesus as her Lord and Savior as a small child and, until she took her last breath, her faith never wavered. Her love of music and talent for playing the piano and singing was used tirelessly throughout her many decades of service for the Lord. She played the piano and organ at various times at Palm Street Baptist, Bethel Assembly of God, NLR Church of God, Faith Community Church and Cornerstone Worship Center.

She was preceded in death by her parents, Ed and Blanche, and her husband Don. She is survived by her children, Keith Cobb (Kathy), Kevin Cobb (Sheila), Kent Cobb and Shari Romes, 14 Grandchildren, 30 great grandchildren and one great-great grandchild.

I have fought the good fight, I have finished the race, I have kept the faith-2 Timothy 4:7.