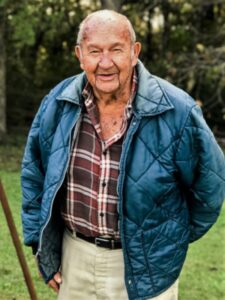 Charles Elton Mathis, age 90, of Carlisle, Arkansas, completed his earthly journey on October 22, 2022.  He was the youngest of six children born to Willie and Myrtle Mathis in Pangburn, Arkansas on April 27, 1932.

He leaves to cherish his memory, his loving companion – Rachel Hester and although he never had children of his own, he took on the role of step-dad to Debbie (Marvin) Reid; Grandpa (Papa Charles) to Andrea (Neal) Hanks, Alex (Sydney) Reid and Ashley (Chris) Clinton; Great-grandpa to his little buddy Vincent Reid and his precious Adelaide Clinton (due in December).

Charles was blessed with a natural mechanical ability despite his lack of a formal education.  He was a great mechanic and worked on re-lifts, power units and other equipment for many farmers in the local area.  When he retired, he would often be called by area farmers to drive tractors during harvest.

He loved having a garden every year and spent many hours behind the tiller.  Every year he would put up his martin houses and would sit for hours just watching the birds.  There was nothing he loved more than his grandkids, although mowing his yard came in a close second.  It was nothing out of the ordinary to see him on his lawnmower mowing at least twice a week.  When his health started to decline this year, he finally handed the job off to his grandson and grandson-in-law.

He was blessed with a long and full life.  He will be missed, but he will always be in our hearts.