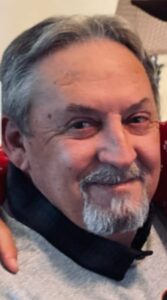 David Holt, 66, of Mountain View, passed away on October 2, 2022, at the VA Medical Center in Little Rock, Arkansas.

David was born on December 10, 1955, to Alton and Nina Holt of Mountain View in Mountain View, AR. After David graduated from Mountain View High in 1974, he joined the US Navy. During his time in the Navy, he spent four years on active duty and two years of inactive duty.

In 1979, David met Dorrie in Palm Desert, CA. David and Dorrie went on to have two children, Sondra and Sarah.

In 2009, David retired and spent his time playing golf, spending time with his grandchildren and family. In the summers, David liked to go to the creek, but his second love was always to be at the golf course playing golf on Saturdays.