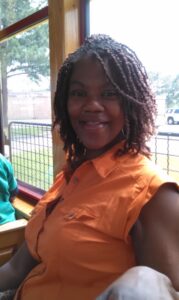 Dion Marie Nash was born in Canton, Ohio on March 2, 1976 to the late Zina Hope Henson. Dion was the baby sister to Christopher Moses Nash and the late Michelle Lynette Nash.

Dion was an exceptional cook! She would prepare a meal that was finger-licking GOOD. Some of THE best food you would have ever eaten!  Dion was like a sponge when it came to absorbing knowledge, and just like a sponge she could wring it all out on you if you asked her to. She was intelligent! Her memory was phenomenal! She could remember a number from here to China.

Dion found great reward in her children and grandchildren. She would always boast about how proud they made her. SHE LOVED THEM DEEPLY.  She always enjoyed the time she spent at family celebrations and gatherings. She was a strategist. It really showed when she played board games, card games, or did puzzles. If she wasn’t cooking or helping with homework you could most likely catch her binge watching  something on “Lifetime” or   cozied up in a interesting novel. Dion had the purest heart and gave positive advice. Her love for God led her to the Women’s Ministry Bible Group where she was a member for many years. Dion passed away in her NLR home on October 12, 2022.