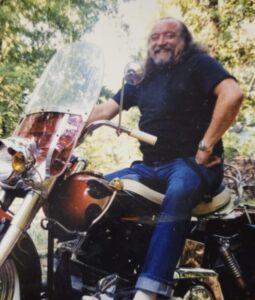 George served in the U.S. Armed Forces, and afterwards was an entrepreneur. One of his most cherished accomplishments was the opening of Wheeler Wings where, “You’d have to be a rooster to get a better piece of chicken!”

His friends and family would describe George as a bigger than life comedy show that would turn any situation into a joke. You either loved him, or simply didn’t understand him. George would give the shirt off his back to those in need. While he had no filter, he was wise with his words. George will be greatly missed, but we all know he’s riding high.

Upon his request, a private memorial will be held at a later date. We would like to thank the ones who honored George’s wishes and stood by him until the end. As George would say, “I’m finally quiet and stiff at last!”