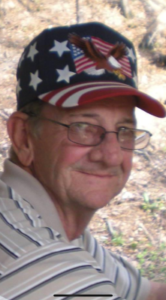 Mike was a true servant and a giver. He was an avid bowler, eagle lover, and cross country traveler. Mike was loved by all.

Michael was born in Paragould, AR, the youngest of three children. After graduating high school, he enlisted in the United States Air Force where he served for 23 and a half years, retiring in November 1990. After returning from basic training, he married his loving wife and mother of his three children, Beverly, on May 4, 1968. They were married for 43 years when she passed. After her passing, Mike married his sweet wife Sheila, on July 13, 2016. They were together for 6 years.

Mike’s life is truly defined by God, family, and country. Mike faithfully attended the North Jacksonville Church of Christ, serving once as an elder. He faithfully loved Beverly and Sheila with all his heart. He was the greatest father and Papaw, expressed great joy for his great-grandchildren, and he loved his dogs. Mike was a true patriot. He was a devoted servant of his country.

In lieu of flowers, donations can be made to the LRAFB Airman’s Attic; Bldg 864 Thomas Drive Crossroads Café, Little Rock Air Force Base, Arkansas 72099.