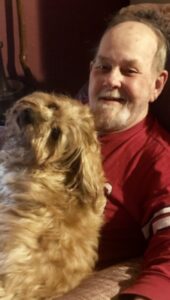 Phil Gazan Peacock, 68, of Monticello, passed away on September 29, 2022.  He was born in Monticello, Arkansas on October 11, 1953.  He was preceded in death by his father, Neal Peacock and mother, Verla Bea Berry Peacock and brother-in-law, Bobby Wells.  He attended Calvary Baptist Church in Monticello.  He had over 50 years in the Automotive Parts Industry and was considered an expert in his field.  He was a former member of the Monticello Jaycees, Civil Air Patrol, Boy Scouts of America, coached both Little League and Babe Ruth baseball teams.  Phil was an avid horseshoe player hosting tournaments at his home.  He also collected Indian artifacts, was an Automobile Aficionado, and a Razorback fan.  Phil also enjoyed the outdoors with hunting, fishing, and camping.

A Celebration of Life will be announced at a later date.

A special thanks to the nurses and aides at Oakdale Nursing Facility.

In lieu of flowers memorials may be made to Calvary Baptist Church and the Humane Society in Monticello, Arkansas.