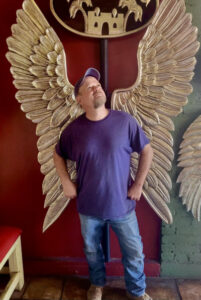 Christopher Lee Jones, just “Chris” to everyone except his mother, came into the world on November 8, 1972, and left us to talk the ears off the angels on November 20, 2022. Already the world is less bright in the absence of his loud and boisterous spirit.

A true vagabond, Chris was never very good at sitting still for too long. His work as a general Jack of All Trades took him all over the country where he gathered a great many stories to entertain his family through his late night phone calls when he was away.

Chris was a connoisseur of cheap beer, an experimental microwave chef, and couldn’t carry a tune in a bucket but was quick to sing along to any song he could potentially know the words to.

He was a good man of great levity, able to find something to laugh about in even the bleakest of situations. He lightened a room just by being in it.

Distinctively charming, incredibly handsome, and ridiculously engaging regardless of how much paint he happened to have on his person at any given time. He was kind to animals and fantastic with children as they were often the only ones who could match his energy. Heaven is most definitely in for a treat.

Chris is survived by his mother, Shelley Gifford; his father, Douglas Jones; his siblings (Shannon, Sean, Chad, Amy, Margo); and a litany of nieces, nephews, and extended family who will miss him immensely.

“For I am persuaded, that neither death, nor life, nor angels, nor

nor height, nor depth, nor any other creature, shall be able to

separate us from the love of God, which is in Christ Jesus our Lord.”