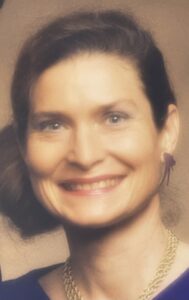 Gail Shoudy Bogard, 77, of North Little Rock, Arkansas, passed away on September 26, 2022 of natural causes. Gail was born on October 30, 1944 in Charleston, South Carolina, the daughter of the late Charles and Elaine Shoudy.

She was a more than 50-year resident of North Little Rock and is survived by her only child, Stuart Byron Bogard and his wife April, of North Little Rock, her grandsons Ethan Caleb Pool, of Maumelle, and Stuart Byron Bogard II, and her granddaughter Lilian Elizabeth Bogard. She is also survived by her brother, Allan Shoudy and wife Jinrong of Pearl, Mississippi, her sister Joyce Dye and husband Cecil, of Hollywood, South Carolina, her sister Connie Blackwell and husband David, of Charleston, South Carolina, and her sister Pati Shoudy Cale of Madisonville, Louisiana. She is also survived by Judge David Byron Bogard, with whom she was married for 18 years (1968-1986). After divorcing, the two remained close friends until her death.

Gail was a member of the North Little Rock First United Methodist Church and later, Indian Hills Baptist/Exit 153 Church. She was an accomplished dancer, having been Prima Ballerina of the prestigious Charleston Civic Ballet in Charleston, South Carolina. In addition, she studied at the American School of Ballet in New Your City and taught ballet in the Fine Arts Department of University of Arkansas at Little Rock. She also appeared in numerous productions of the Arkansas Repertory Theatre in Little Rock, Arkansas. An avid writer, she spent much of her spare time writing several unpublished novels.

Gail attended the University of Northeast Louisiana, in Monroe, Louisiana, where she graduated first in her class. Following that, in 1968 she attained her Master’s Degree in English from the University of Arkansas in Fayetteville, Arkansas.  Subsequently, Gail taught English at both the University of Arkansas (Fayetteville) and University of Arkansas (Little Rock).  Much later in life, Gail returned to the University of Louisiana in Monroe/Tulane Medical School and obtained her Master’s Degree in Occupational Therapy, an area in which she worked for over a decade until her ultimate retirement. Though life threw Gail many curves, she met them all with determination and courage. Her love of God and faith in His constant care were the source of that strength. Her Family plans to celebrate her life with a small, private memorial service in Charleston, South Carolina. Memorials may be made to the Argenta Community Theatre in North Little Rock, Arkansas.