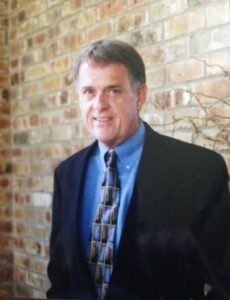 Lee Wimberley, 73 of Conway, Arkansas was called home by the Lord on November 10, 2022. He was a beloved husband of 53 years and he leaves behind his wife Peg Wimberley, daughters Heather Langley [Phillip Langley] and Rachel Wimberley [Andrew Holmes], and grandchildren Maegan Langley-Walton [Michael Walton], Maddox Langley, and Ezra Wimberley-Holmes, and sister Terri Wimberley.

Lee was born in 1949 in Blytheville, Arkansas to Marion and Hollis Wimberley. He met and married Peg Holder after they met at Harding University. He offered her guitar lessons, and the rest was history. He loved her deeply until his last day. One of his greatest accomplishments was being a father. He was proud of both his daughters, attending Girl Scout meetings, father-daughter dances, and school plays. He taught his children to have a strong work ethic, to treat everyone with respect, and to love family.

At a very young age, he obtained his pilot’s license and would spend the majority of his life enjoying the freedom and fun of being a private pilot. He had a long and distinguished career with Electrolux Corporation and his work afforded him the opportunity to travel the globe! While Lee did enjoy travel, he was a homebody who truly loved rural life, always wanting a little bit of land for animals and gardens. One of his favorite things to do was make sun tea and walk to his garden to grab a handful of fresh mint to add in, sit back and listen to Glen Miller.

He retired to Conway, Arkansas where he enjoyed the picturesque view from his study, watched classic movies with his dogs, and brushed up on his cooking skills. His grandchildren were a special delight to him, he had a strong bond with each one of them and was sure to let them know how much they were loved.

He will be missed more than we can say, and we are so thankful for all of the adventures we had together. The family will hold private services and ask that any donations are made in his honor to the American Cancer Society.

Psalms 116: “I love the Lord, because he hath heard my voice and my supplications. Because he hath inclined his ear unto me, therefore will I call upon him as long as I live.”