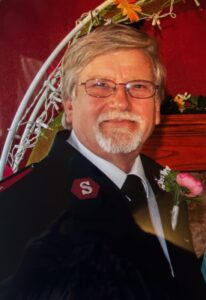 Major Ralph William Hansen, age 75, of Romance, Arkansas went to be with the Lord on Tuesday, December 13, 2022. He was born in Brooklyn, New York on April 23, 1947 to the late Hans Engleman Hansen and Hjodis Paulson.

Ralph was an avid motorcyclist for 40 years. He was a member of the Christian Motorcycle Association (CMA), the American Motorcyclist Association (AMA), the ABATE of Arkansas, the United Sidecar Association, American Legion, and the Goldwing Riders Association for many years. Ralph enjoyed playing and teaching guitar and being a Ham Radio Operator. He was a United States Veteran and served in the Air Force for 4 years and the Reserve for 2 years. He was also a Patriot Guard Member and was an officer in The Salvation Army for 33 years.

Ralph is preceded in death by his parents, Hans and Hjodis Hansen.

A family-hosted celebration of life will be held at a later date.

In lieu of flowers, memorials can be made out to the Salvation Army in North Little Rock or the CMA Run for the Sun.