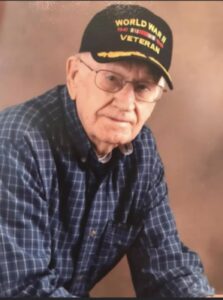 Paul Richard Greszler, 97, of Little Rock, Arkansas passed away peacefully at his home on December 25, 2022. Paul was born in Henrietta, Ohio on January 19, 1925, to the late Stephen Greszler and Anna (Szabo) Greszler (both of whom immigrated to the United States from Hungary).

Paul served in both World War II and the Korean War; joining the Navy in 1942, at the age of 17.  While in the Navy he was a deep-sea welder and served on the USS Zeus.  He transferred to the Army in 1948 as an Engineer.  He served for over 20 years and attained the rank of Major.

He loved riding his motorcycles, horses and tractors; always ready for the next adventure.  He was a member of Christ the King Catholic Church and volunteered with Hospice for over 20 years.  He will be missed by all that knew him.

Inurnment will be at Fort Logan National Cemetery in Denver, Colorado.  A private service for the family will take place.  In lieu of flowers, the family requests donation be made to a local hospice organization.