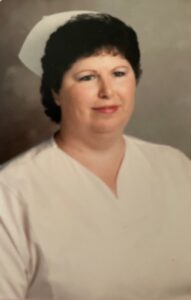 Ms. Vivian Yvonne Bolden Pollard Holliman went to be with her Lord and Savior on December 14, 2022 at the age of 68. She was born on November 9, 1954 in Hot Springs, Arkansas.

She is preceded in death by her parents James and Peggy (Coggins) Bolden both of Bradford, Arkansas. She is survived by her two daughters Kimberly Pollard Nation (Justin) of Bradford and Kylie Holliman Pearrow of Searcy; two step-sons Heath Holliman (Nikki) of Bradford and Chris Holliman (Tosha) of Searcy; two sisters Peggy Barnes (William) of McRae and Karron Waller of Bald Knob; three brothers Jim Bolden (Peggy) of Toccoa, Georgia, Bill Bolden of Searcy, and Tony Bolden of Batesville. Vivian had two grandchildren, Avery and Emily Pearrow both of Bald Knob and six step-grandchildren, Landon Holliman, Cade Holliman, Maddison Holliman, Cody Nation, Abby Holliman, and Shawnee Descant (Hunter). She had a host of nieces and nephews.

Vivian enjoyed her career as a nurse for as long as she was able to do it. She had a host of friends including one special friend who took care of her daily, Mrs. Vicky Solida. She loved making jewelry and crafts, spending time with friends and family, and shopping. She never met a stranger. She was outgoing and loved the Lord. Ms. Vivian will be truly missed by all who knew and loved her.