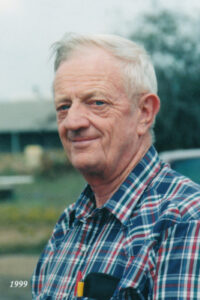 He was born in Little Rock, AR to Bonnie and Dorothy Lambertus and is preceded in death by his parents and stepfather Allen Roberts, brothers Bob and Butch Lambertus, and sister Patricia Wilson.

He graduated from Jacksonville High School in 1953 and served in the Air Force National Guard for four years following graduation.

Bill retired after 48 years of working for Hercules/Vertac Chemical Plant in Jacksonville. After retirement he was able to enjoy 15 years of family, grandchildren, and great grandchildren. Better known as “Pappy” he enjoyed many years of hunting, reading stories to the great grandchildren and telling them about the “good old days” and trying to get them to watch Gunsmoke. He was a big fan of the Razorbacks and the Kansas City Chiefs.

He enjoyed many trips to Branson and vacationing with family, gardening and bird watching. He was known to all to be a loyal and generous friend. He attended McArthur Assembly of God church in Jacksonville.

Visitation will be Saturday, January 28th, from 12:30 – 1:30 at A Natural State Funeral Home in Jacksonville with burial following immediately after at Sumner Cemetery in Cabot, AR.